Banner Saga 1 is an epic role-playing game with a Viking setting where your actions have a direct impact on your journey. The animation style used in the game is beautiful and the story has a lot of depth that is often a hit or miss for a lot of players. However, the game doesn’t just tell a story and provides the player with enough choices and options throughout.

The objective of the game is to travel with your caravan through beautiful yet harsh landscapes and chose your allies and enemies as you go along. Since it is a role-playing game, every decision you make regarding travel, conversation or combat will have a significant effect on the story being told. 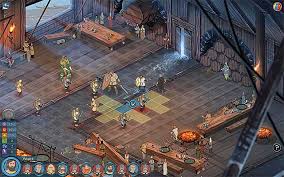 The game has over twenty-five playable characters from two races for you to chose, each with a unique ability and upgrade options.

The visual style of the game is based on old-school animation and looks absolutely stunning and almost nostalgic of great old animated movies. The story that is being told in Banner Saga 1 is epic in proportions and unravels as you keep going.

The combat system in the game is turn-based, the same style made famous by games like Final Fantasy. The combat system demands players to use strategy when it comes to attacking and defending their characters and their caravan. 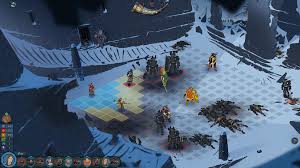 In Banner Saga 1, the combat animations are hand drawn and they look stunning just like the rest of the game. The score is composed by Grammy-nominated composer Austin Wintory and is one of the best parts about the game.

As for the choices in the game, the world of Banner Saga 1 is a harsh one and many times you’ll lose characters while going through your journey. It is not uncommon for players to feel guilty for their choices later as the journey keeps going.

Even though there can be some criticism raised towards the combat system of the game, it is far from being broken and provides a nice twist on the traditional turn-based combat system.

Regardless, what Banner Saga 1 does so well is tell an epic story and creates a detailed world and lore that players want to keep coming back to. The world map is filled with descriptions about every little village, city, trail or mountain. It is successful in terms of telling a story that is massive in scale but is still accessible.

The word of Banner Saga 1 feels alive and filled with real events and characters. The most successful thing the game has managed to do is create a perfect blend of a game where a great story is being told and at the same time, provides enough choices and actions to the players to keep them interested.